KNX topology in smart home – KNX systems can be added to as desired, and can consist of several KNX subsystems based on different communication media (TP, PL, RF, IP). To ensure problem-free transmission of telegrams between individual bus devices, KNX systems must adhere to a specific topology.

The basic unit of a KNX TP installation is a line (Fig. 19).

A line includes a KNX power supply (including choke), and usually no more than 64 other bus devices. The power supply and twisted pair line (bus cable) perform two functions: they supply the bus devices with the power they need, and permit the exchange of information – i.e. the sending of telegrams between those devices. The bus cable can be laid as desired, and branches can be added at any point.

The resulting topology is a free tree structure, which allows a great deal of flexibility in terms of layout. Line Repeaters can be used to extend a line if more than 64 devices are needed. Sections added in this way are known as line segments. A line segment consists of a line repeater, a power supply (including choke), and no more than 64 further bus devices (line repeaters count as bus devices in the line).(KNX Topology in Home Intelligence)

No more than three repeaters can be operated in parallel in a line, meaning the maximum number of bus devices is 255 (Fig. 20).

Figure 20. Maximum length of a line in KNX TP

On the one hand this makes the system more manageable, and on the other hand it reduces the number of telegrams travelling along each line (by taking advantage of the filter function of the line couplers).

A Line Coupler will not send a telegram to a line for which it is not destined. Up to 15 lines can be operated via Line Couplers on a line – the main line – to form an area (Fig. 21).

KNX topology in smart home – The main line can likewise accommodate up to 64 devices. Line Repeaters cannot be used on the main line. Line Couplers in the main line count as bus devices. Each line needs its own power supply (including choke).

Up to 15 areas can be added to an area line via Area Couplers, to form a complete system (Fig. 22).(KNX Topology in Home Intelligence)

Figure 22. Up to 15 areas can be coupled via area couplers in KNX TP

The area line is also called the backbone, so it also needs its own power supply. The separation of the system into lines and areas has the following substantial benefits:

For signal formation reasons, and due to the maximum permissible propagation delay, distances in line segments are limited as follows:

Every device in a KNX system is assigned a unique, unambiguous number – its Individual Address. This consists of three numbers separated by dots. The numbers depend on the position of the bus device in the topology:

The topology in KNX PL is similar to that of KNX TP, and is made up of lines and areas. The basic unit of an installation is a line containing a maximum of 255 devices. An area is created by coupling 15 KNX PL lines using KNX TP; in PL the maximum number of areas is eight, however.

Instead of line couplers, in KNX PL system couplers are used. The individual KNX PL lines need to be separated from one another using band-stop filters. System couplers, like all other couplers, have filter functions, which make it possible to reduce the number of telegrams in the various subsystems. Because the number of telegrams in a KNX PL installation is considerably smaller than in KNX TP, using KNX PL can be a necessary measure for preventing congestion in the bus system.

System couplers (like Area and Line Couplers) are assigned the sequential number 0. All other PL devices are assigned a Individual Address corresponding to their position in the topology.

The devices in a KNX RF installation do not need to be arranged hierarchically, and can be installed virtually anywhere. Provided that they are within range of one another, any sensor can communicate with any actuator. It is not possible to limit the range of RF radio signals geographically, i.e. KNX RF telegrams can be received by devices in other, nearby KNX RF installations. It therefore needs to be ensured that neighbouring installations cannot interfere with one another. Telegrams sent by KNX radio transmitters always include the serial number/domain address of the device as a unique identifier. Only those receivers paired with the transmitter are able to process telegrams sent by it.

A KNX system can be purely a radio network, or can combine radio with another communication medium (e.g.KNX TP). Media Couplers are used for coupling purposes.

KNX topology in home intelligence – Media couplers are assigned physical addresses corresponding to their position in the system topology. Physical address 2.3.20: media coupler with sequential number 20 in the third line of the second area. 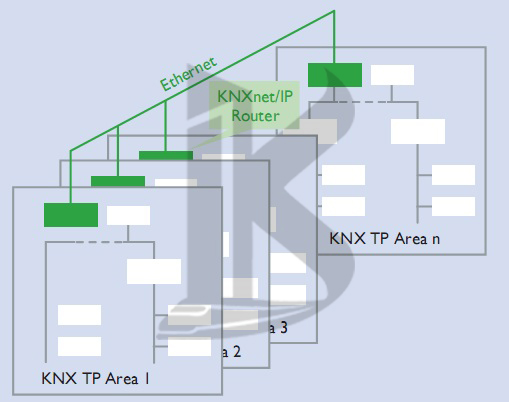 During operation, KNXnet/IProuters communicate with one another and with the other KNX devices in the system via Ethernet, using routing as a communication method. Most KNXnet/IP routers also support tunneling, i.e. they can also be used as an IP programming interface for ETS.

KNXnet/IP routers can additionally be used to connect entire separate systems with one another via Ethernet (Fig. 25). 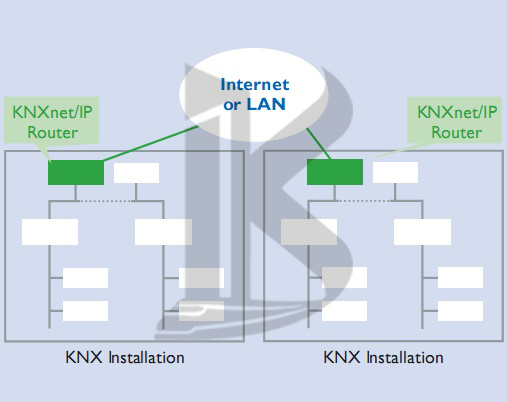 This can be useful if e.g. two buildings are each equipped with a KNX twisted pair system, and these two installations need to be combined into a single system.

KNX topology in smart home – If there is already an Ethernet connection between the two buildings (which will often be the case in commercial and institutional buildings), then there is no need to lay a new cable between them.

KNX IP can also be used to network KNX devices, e.g. KNX displays, with one another. Software is available for communicating with KNX systems via KNXnet/IP.

Ethernet installations are connected using network cables. Various types of network cable are available, each using a different method for shielding the cable cores. It is generally not permitted for these cables to be longer than around 100m. For longer installations, special network components are needed to join together individual network segments. In residential buildings cable length is not usually an issue. As already mentioned, in commercial and institutional buildings the existing network infrastructure can be used.

All of the topologies for the various communication media (TP, PL, RF and IP) can be used in combination with one another if desired (Fig. 26).