in smart building Radio is always an appropriate KNX communication medium in those situations where it is not possible to lay new cables in the building (e.g. for sensors in inaccessible areas). KNX RF is also particularly suitable for extending existing KNX TP installations. Theoretically KNX RF could allow all technology in a building to be controlled wirelessly, but this will remain the exception rather than the rule.

In smart building To enable RF sensors to be positioned where they do not have access to mains power, they are generally fitted with batteries. This is only possible if these devices do not need to be in a permanent ready to receive state. To help here, a unidirectional device model has been defined in Home smart Protocol KNX that only sends telegrams when needed, and does not contain a receiver.

Actuators, on the other hand, need to be able to receive at all times, so need to be bidirectional. RF actuators therefore generally take their power from the 230 V mains. In KNX all receivers must also be able to transmit. The unique capabilities of KNX shine through when considering the performance of the system as a whole. 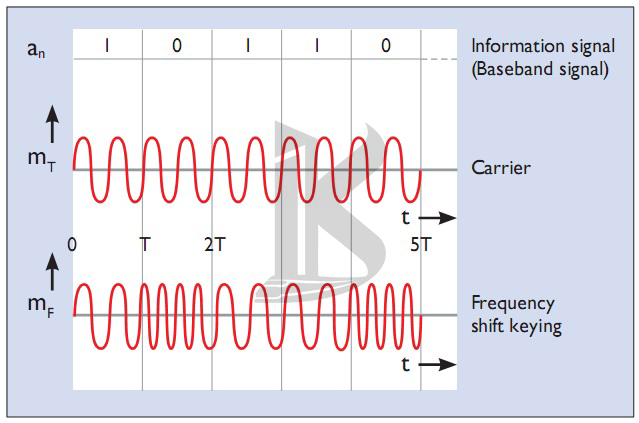 The logical states zero and one are produced by slightly modifying the frequency of the carrier wave, also known as the centre frequency. Choosing the correct centre frequency is an important factor in determining the transmission performance.

KNX RF Multi over comes this interference by enabling devices to switch from an occupied channel (e.g. F1, which is identical to the channel used by KNX RF Ready) to a different radio channel, i.e. ideally two other fast channels (F2 and F3), or two slow channels (S1 and S2). The fast channels are intended for applications operated by humans, e.g. lights, blinds, etc., while the slow channels are for devices that do not need to be permanently in receive mode, e.g. HVAC control systems. Fast channels have a data rate of 16.384 kbps, slow channels only half of that.

In smart building systems Although devices are always capable of sending telegrams, they are switched to sleep mode to reduce their consumption by up to 80 % for fast channels and as much as 99 % for slow channels, waking up only periodically in order to receive telegrams. To ensure compatibility between single and multi-channel devices, a compatibility scheme has been developed, whereby newly-developed single-channel devices now need to use longer preambles.

It must be possible for multi-channel devices to be downgraded to single-channel devices. KNX RF Multi also makes it possible to check that a telegram has been received correctly: fast, direct acknowledgement of receipt (Fast IACK) can be obtained from up to 64 individual receivers. If no Fast IACK is received, transmission of telegrams is automatically repeated. In larger installations, retransmitters can be used to forward telegrams to distant installation locations. Media couplers can be used for coupling KNX RF systems with KNX TP systems.

Like with all KNX communication media, in KNX RF the useful data are sent via multicast telegrams. This means that one telegram can be received by several bus devices simultaneously and so e.g. switch on several lights at once. KNX RF telegrams are made up of several data blocks separated by checksum (CRC) fields (Fig. 13).

the first the control field contains information about the length of the telegram, the transmission quality (reception performance), the battery status of battery-operated KNX RF devices, and whether the device is unidirectional, while the second field contains either the KNX serial number or the domain address. The serial number is assigned by the manufacturer and cannot be changed. In commissioning in E- Mode, the serial number is evaluated in the receiver together with the source address of the sender.

In KNX RF S-Mode devices, the domain address is assigned in ETS (version 5 or higher), and serves to keep neighboring RF systems separate from one another. The third field, the checksum field, allows the receiver to determine whether or not a telegram has been sent without error.

In addition to further control fields and checksum bytes, the second data block consists of fields containing the individual source address (physical address), the destination address, and the payload. The payload is the actual information that is to be sent. Depending on the length of the payload, a KNX (make smart home) telegram can also contain further data blocks.

Unidirectional devices only send telegrams when necessary. Because of the very small duty cycle of 1 %, it is virtually impossible for telegrams to collide, even in KNX RF Ready. Bidirectional devices check before sending a telegram whether the radio channel is free. If the channel is occupied, the device waits until it is free again before sending the telegram. As already mentioned, in KNX RF Multi the sender can request acknowledgement of receipt of the telegram.

KNX RF components can be flush-mounted, surface mounted, or built-in. Flush mounted devices are mainly inserts onto which operating buttons are mounted to enable lights to be switched on and off or dimmed, or drive mechanisms for blinds to be operated. The radio communication components can be integrated either in the push-on interface or in the device insert. Various sensors, actuators and combination units are available as surface-mounted/built-in devices suitable for mounting, gluing or integrating in any desired location and on any surface.