The demand for comfort and versatility in either residence or commercial building is growing fast in recent years. It implies a complex system covering intelligent control, low energy consumption, high level security should be involved. In the past, the system is quite complicated in terms of electrical wiring because each function of device needs its own physical control cable shown in Figure 1. It requires a large amount of effort in terms of design and installation at the beginning and later deploy the high difficulty on maintenance. The high density of cables could also have a high risk of fire.

Therefore, a new installation for uni-communication between any controller, sensor and actuator are developed and named with KNX system. The KNX system uses only two-wire installation bus routed transmitting the signals between devices in parallel to the 230 VAC mains wire. Therefore KNX system substantially reduces the mass work of electrical wirings inside the building and further lower fire risk and maintenance.

The KNX system can not only be very simple with few device but also be extended a complex system with hundreds device for use in a building. In both case, KNX power supply is needed for powering the KNX Bus. In this part, it explains why a KNX power supply is essential for KNX Bus environment and it cannot be replaced with conventional switching mode power supply.

That is just a simple system with only two device (wall flush button and actuator for controlling electrical blind) on the KNX Bus shown in the Figure 2.

In case the user press the button in order to turn on the electrical blind and see through the window, it turn out this system is not functioning. The digital command from button cannot be transmit to actuator for controlling the blind simply because the KNX Bus is not powered.

there is 30 Vdc conventional power supply added into the existing Bus. Now the button could transmit the signal out, the so called active pulse, on the bus. However the actuator is  still not able to receive and further response to it because this signal is not a complete and proper KNX signals.

The active and equalization pulse is then combined to realize a correct signal representing “0” in the digital world. The combined waveform should be finished within 104 µsec which is equivalent 10 kHz following with another combined waveform for “0” or no waveform( just 30 Vdc) for “1” in the next 104 µsec. Such “0” & ”1” sequential numbering represent the actual function/command from the button to the targeted actuator of the blind system. As result, this simple KNX system is operating properly. Other KNX device, e.g. lighting, heating, HAVC, security…etc., has same working principle on the same and only one bus for maximum flexibility. Each KNX device consumes 10 mA from the power supply for transmitting and receiving signal on the bus.

In case the KNX power supply is rated 640 mA, it implies the maximum allowable number of device on the bus is 64 pcs. Hence the KNX Power supply with integrated choke is very essential to keep the normal operation of KNX Bus system. 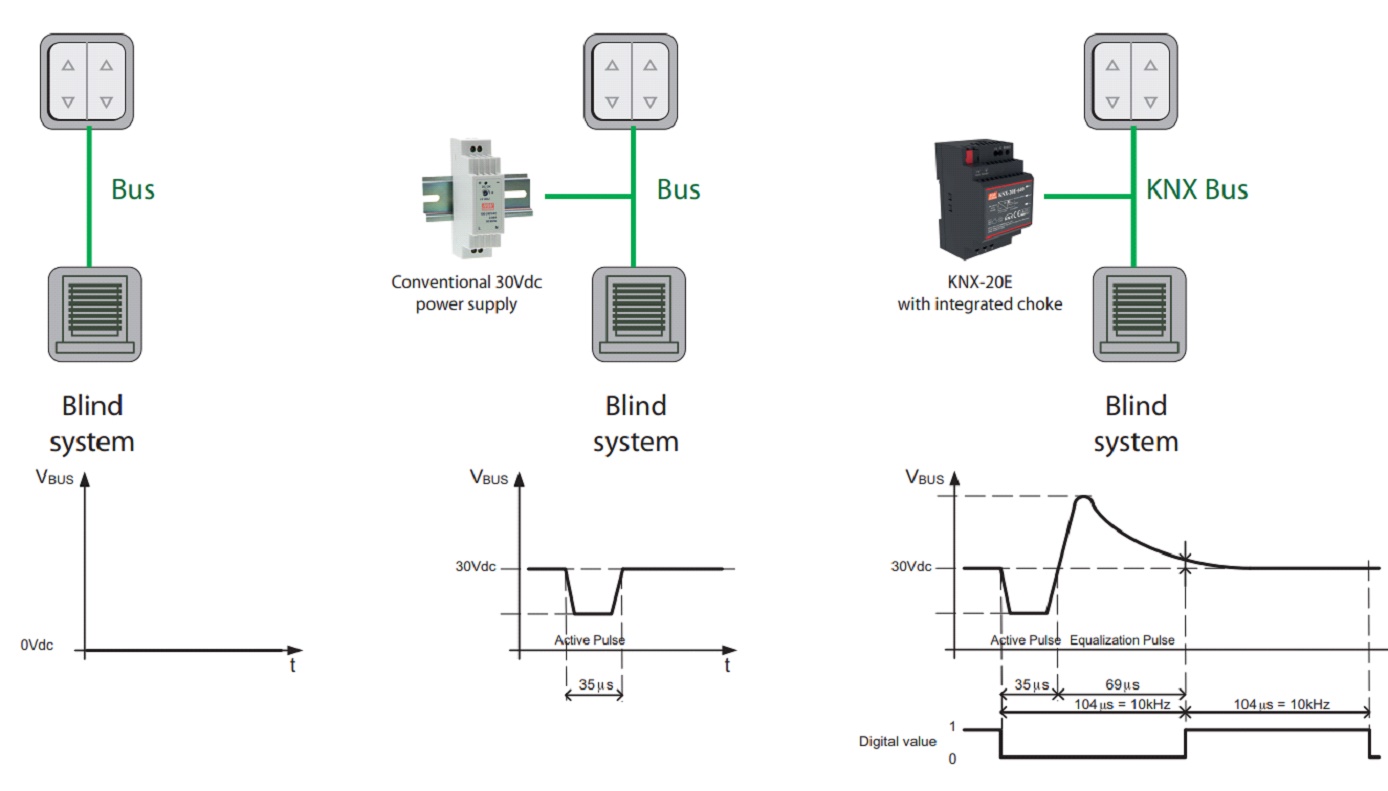 Figure 2 Scenario 1 the bus is not powered (left); The bus is powered but not by KNX Power supply (middle); The complete and working KNX Bus system that sending the correct digital “0” & ”1” command for communication (right)

All KNX device including controller, sensor and actuator are in general installed in a cabinet within a building. The dimension of KNX device should be designed according to the standard DIN 43880 to make sure installation uniformity. The width of KNX device is coded by one or multiple standard unit (SU) by definition each single SU should not be more than 18 mm. Current mainstream 640 mA KNX Power supply has 4 SU(54mm) width or more. New product with slim design i.e. 3 SU allows more other KNX device to be installed in the fixed space within the cabinet which enables versatile functions for modern buildings.

KNX system offers a lot of benefits for operating in modern residential and commercial buildings. KNX Power supply is a key unit and device to run the KNX environment smoothly.